Meditation, simply put is the practice of ascending in consciousness.

߷ How old is the practice?

This practice dates far back in human history, long before passing information in written form became a norm. Having stated that, we’re hinting at the very idea that our knowledge about meditation, our attempt to soar higher in consciousness goes so far back, that we don’t have, what we now deem as proof as per our modern-day society. But based on what evidence we do have, the oldest written copies of the Vedas, puts this practice to be at least as old as 1500 BC.

߷ How many stages of meditation are there?

Merging the two systems will hopefully reveal a unified view.

→ ‘The constitution of man’ (read below),

→ The stages of meditation as outlined in the ‘Yogasutras of Patanjali’ (an ancient Indian text outlining the practice) and,

→ The EEG stages of brain (a modern take on depths of consciousness & meditation).

That in mind, we’d like to start with the ‘constitution of man’. This chart comes from Alice A. Bailey’s body of work (dictation by Master Dhwaj Khul, refer Initiation: Human and Solar).

There exist 7 planes of progressively higher energies (entropy – degree of randomness, for the geeks), starting bottom up: Physical plane → Astral (emotional) plane → Mental plane → Buddhic (soul) plane → Atmic plane → Monadic (spirit) plane → Adi (Refer diagram below). Everything in manifestation exists simultaneously in all these 7 planes, we all are made up and share these Plane. 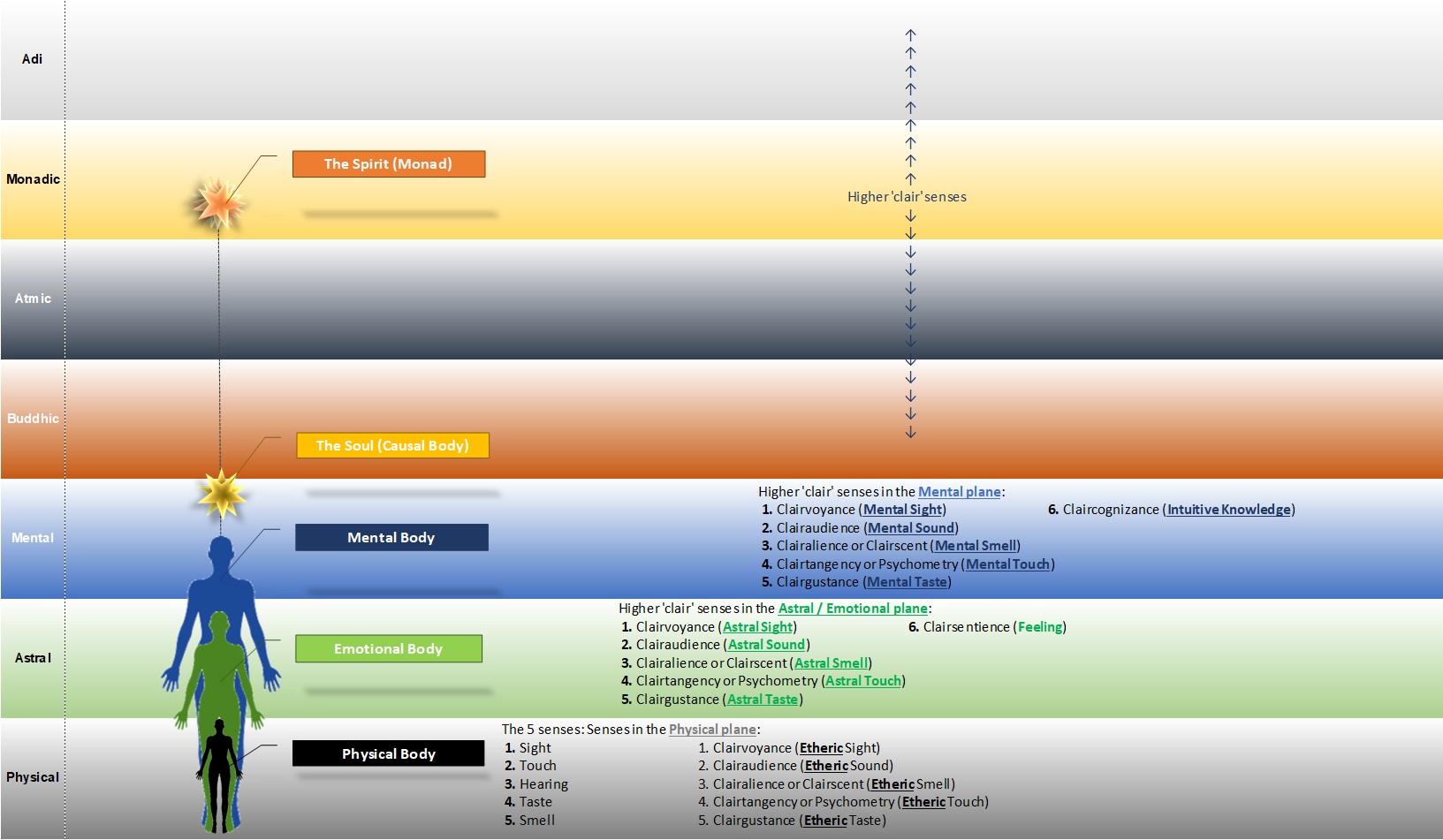 There are of course much more complexities to this topic when we try and fathom:

→ The spirit’s journey into matter,

→ The need for a soul (causal body) and subsequent denser bodies.

→ The complexities of all 7 planes (along with 7 sub-planes to each plane),

→ The senses and experiences related to these different planes, etc.

→ When the mind of focussed on a concrete object.

→ When we concentrate on anything, we are automaticallyperforming the first stage of meditation.

→ Example: When you listen to a sound or a name, the veryprocess of your ear transforming the waves into

→ This is a deliberate form to meditate.

→ Here, the practice of meditation breaks into 2 separate paths:

→ Both paths lead to:

⊳ Development of higher senses, pertaining to the higher Plane.

⊳ Note: Beyond a certain point when the consciousness rises beyond the mental plane, Savichara (with

thought) meditation merges with and becomes Nirvichara meditation (a state of no-mind exists).

⊳ As this form of samadhi deepens, it leads to a true understanding of time and space.

→ Caution: Because the fascinating nature of this state & its senses (refer to the senses outlined in the

diagram, note that each plane comes with its own variation to current senses and sometimes bestows a

completely unknown sense to the meditator!) it can create a strong sense of attachment to one’s

achievements; Some meditators find it hard to let go of their experiences in this state, given the glamorous

nature of this experience and how automatically these senses gives you something to brag about. One has to

satiate the striving one and should not stop one from journeying onwards.

→ When the consciousness rises beyond the many subtle Plane (beyond etheric, astral & lower mind), one

becomes aware of the underlying bliss, a reality far subtler than mere emotion.

consciousness to experience the Soul's (experience of) 'Eternal Now'.

→ When one resonates at this level of consciousness, one draws equal breath via the two nostrils (Ida &

Pingala nadis), which results in creating an equilibrium, which further results in causing the Kundalini to rise

up via the 'Shushumna Nadi' (central chamber).

→ This further causes the 'Sattva Guna' (spiritual aspect of life) to dominate, taking one further away from

→ Due to the fact that during this form of meditation, the meditator is so beyond the Gross (Physical) and

Plane which tie one to these Plane) are cut off, thereby the sense of 'I Am' stops creating its world (which is

the most immediate cause of one's pleasure and pain).

→ Note: Only few amongst us can raise their consciousness to this level. It takes a lot of focus and soul

growth to elevate and hold this point of tension in one’s meditation.

consciousness is beyond the Buddhic plane, in the Monadic or Atmic planes).

→ The meditator, transcending the energy exchange in the Gross (Physical) & Subtle (Etheric, Astral &

Mental) planes, loses the separative sense of 'I-Am' individuality. While the consciousness continues to soar

into the higher Plane, it comes in contact with the pure source of the individuality, the Monad (or the Spirit).

within rather than some external source.

→ Note: Only a handful of people are known to have transcended to this level. Achieving this level

automatically implies that the person in question:

⊳ Lives his / her life as fully functioning soul with no ego or personality constraints to limit their progress.

⊳ Have achieved an ‘at-onement’ with their spirit or monad. They are a fully integrated fusion of the trinity,

→ This is the highest form of meditation possible, at least from our human perspective!

→ This is not merely empty-mindedness, but a vast stillness, that is indescribable to the typical level of

→ Note: This is a legendary state of awareness which transcends known reality. The word legendary is used

these examples known to mankind, given that the rest cannot comprehend this state of existence until they

Using EEG, we can measure the rate of electrical activity (neurons firing) within the brain, different states of mind relate to different ‘brain waves’, so to speak. In meditation, we often say the key phrase ‘still your mind’ or ‘clear your mind’, needless to say that this hints at the fact that, the lower the brain waves, the deeper we go in our meditation. That in mind, we should note here that the brain is simply the hardware we have while consciousness is the software operating system it is running. This points to the fact that there will be deviations with respect to brain waves vs stages of meditations. Below is our take on it.

1. Gamma State (30 – 100 Hz): This is a state of hyper mental activity. This is someone putting out fires or multi-tasking (best case scenario) or freaking out (worst state scenario). This state does not bode well with regards to a relaxed state of meditation.

2. Beta State (13 – 30 Hz): This is best thought of as normal ‘work mode’, a state where in we are alert, thinking and reacting on a day to day basis. This is the first stage of meditation (SaVitarka or Concentration) as stated above.

3. Alpha State (9- 13 Hz): This state involves slowing down of the mind and correspondingly the brain. In this state a person is calmer, almost in a daydream like state. This is perhaps corresponding to the second form of meditation (SaVichara or conscious attempt to meditate). In this state, imagination, visualization is heightened.

4. Theta State (4 – 8 Hz): This state involves a person in either light sleep (bordering the realm of the subconscious mind) or in deep contemplative meditation. This is where the difference between hardware and software becomes more visible. At this stage the, hardware is attuned to either experience:

the realms of Emotional or Lower Mental Planes. Or,

→ An even deeper form of meditation, the next stage, 'Sananda' (Blissful state of the soul) wherein the

and / or Buddhic plane (the realm of the soul). If this is the case, then the very fact of achieving at-onement

with the soul, brings in tremendous bliss, which is what this stage of meditation is known for.

5. Delta State (1 – 3 Hz): This state is experienced by the normal folks when they are in a state of deep sleep. This state can be achieved by a conscious meditator once he / she ascends in their consciousness beyond the Gross (Physical, Etheric), the Subtle (Emotional, Mental) and even beyond the Buddhic plane (the plane of the soul). Doing this consciously takes some doing! Many hardcore monks spend years in stilling their minds and ascending to these planes and beyond. This is the state of our hardware, the brain when one reaches the final 2 stages of meditation:

the Buddhic plane (realm of the soul) is in direct contact with the Monad (spirit).  This stage is correctly

identified as a state of a blossomed consciousness.

→ ’Asamprajnata’ (Without Support), is the final legendary stage of meditation wherein the meditator is

experienced in holding this level of consciousness 24x7, that they do it without even trying (thus termed

without support). The consciousness can ascend to the final plane with the Cosmic Physical, the Adi plane.

greater divine. This form also leads one out of individual sense of self into a greater whole. Language is inapt to

Please keep in mind that we are relating everything we know as of date; The esoteric / eastern knowledge base has been evergreen and changeless, while as concrete science evolves and can fathom more phenomena, we would possibly have a more EEG states (or different experiments, example brain topography etc.) to relate to and aim at quantitatively understanding these wonderous stages of meditation!